Trek to Rohida aka Vichitragad Fort.

By Unknown
/ in Bhatkanti Unlimited Blog Rohida
No comments 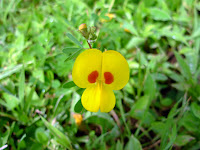 Hi,
We decided for the Rohida (Vichitragad) fort trek. The final plan draft was conveyed to members of "Bhataki Toli...भटकी टोळी..." on saturday by phone. Decided to meet on a Katraj bridge (new) on bypass highway. All set.
On da day Swapnil had a setback by his flat tyre, but he managed to get Santosh on call to pick him up. Started from their after settling the previous trek account and rammming the bikes through the new tunnel over 90kmph, taking right turn just after Kapurhol reached Bhor for a morning tea and breakfast. On the way was scenic Bhatghar dam and couple of bridges. Our regular breakfast point at Bhor was "Hotel Shriram" in main market with mouth watering Misal-Paav.
From there we proceed to Bajarwadi- a base village of Rohida. To kick off the day got a very good macro shot of a wild flower (shown in the adjoining snap). From there a chilling waterfall where we restrict ourselves from getting wet. Then parking our vehicle near a school we headed to top. few steps forward and goshhh.... we really had a trailer of what lies beneath. It was so tiring and steep ascent to the top. Couple of us managed to reach atop in a single break. Most were tired and had to take 4/5 breaks.
On top Santosh found his old time classmates and another "Bhataki Toli". Then after all clickography and modelling we had a mini lunch of bread-Tomato saus. Santosh was taking lessons of whistle blows from Rajesh. And to everyone's surprise he managed to blow "cooker chi shitti". Ajun gas motha kela asata tar nakki bhari vajali asati. ;) All the time santosh was looking for the kadeloat point. I think he wanted to take revenge of the words "cooker chi shitti". First time in all treks Sourabh was looking tired for unknown reasons.
On the returning path we decided to drive down to Ambavade village for visit to suspension bridge )santosh chya bhaashet "doricha pool"). Bridge was too small than what we expected. But the waterfall and the surrounding area after the bridge was the place where we enjoyed a lot.
On our way back had a lunch in "Janata Class Restaurant" near Bhor. Where everyone's apetite got satisfied and also coupling it with the batting of Sachin Tendulakar (4th ODI Ind-Eng).
Again ramming the bikes at a speed of close to 90kmph reached Pune before sunset. That is what we expected. After this trek again same question arises "Guys, What next?"
Check the snaps on the picasa album:
http://picasaweb.google.com/pankajzarekar/VichitragadTrekSept2007