One Day Trek to Hadsar. 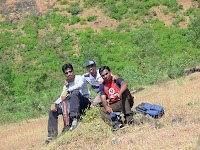 And we (me and Santosh) set for the trek early morning on my Discover Jadoo and picked Shrikant on his Caliber at Nashik Phata. Having a delicious Misal-Paav and Kanda Uttappa at a descent hotel on Pune Nasik Highway drifted ourselves down to NarayanGaon. The drive after Rajgurunagar was a bit difficult as no permanant dividers and the opposite side traffic posing for a risky overtakes. After Narayangaon keeping the GMRT's telescopes on the right, we headed to Junnar. Junnar to Hadsar road was a substandard and then encircling the backwaters of Manikdoh Dam we reached at Hadsar base village (population probably below 300). Wondering to see the concrete road (pathways) within the village parked our bikes in the village. The villagers told us that there were 2 paths leading to the top, but as always we chose the difficult one (अंगात मस्ती, दुसरे काय?).

All set for the trek. Crossing the plateau midway we headed towards the narrow pass which leads to the very narrow pass with a dry grass, and ends at the wall of the fort. On the ways till the plateau I got some good clicks with macro shot mode. The way up was little tiring because of the grass and a steep ascent. After reaching a top it was in all wonderful view. The "Raanwara" playing "zombi" with us and "Nidhada Sahyadri" posing in front of us with its "दुर्गमालिका" (necklace of forts). Now we were feeling better with the support of biscuits and drinking water. Wandering around the still intact fortification and a couple of water reservoirs and a Shivmandir with the lake behind it, had some "गुजगोष्टी " with the Sahyadri. Later on I decided to try out some experiments with my camera and got good panorama shots of the forts' necklace of Naneghat region.

Still our "माज" is not satisfied, so we decided to get down from the other way, without knowing where it will land us. This route was comparatively easy and having rock cut steps to get down. On the way down, passing the ricefields and we had a cold water relief at a villagers' huts on our way back. Watches were showing the time of 2.30pm and our apetites started demanding. Later we came to know that the route which we had chosen had taken us 5km away from the place where we parked our bikes. No option othe rthan walking along. After 2.5km of walk we finally saw a Jeep coming from behind and asked for a lift. The driver was kind to us like a angel from heaven and he dropped us at Hadsar village, offcourse took hs nominal charges of Rs. 10/- for 3 of us.

Got fresh on the well and came back to Junnar. It was the only place where one can have good food in that region. At 4.00pm attacking on Murgi in a hotel and cold drinks later we set for "Back to Pavillion".

We reached home at 8.00pm reminding each other that the overnight trek is due and it will be planned ASAP.
More of this trek @ http://picasaweb.google.com/pankajzarekar/Hadsar04Nov2007
हे दुर्गालंकृत सह्याद्री, मी लवकरच पुन्हा येईन...