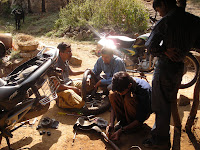 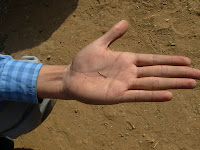 Though everyone was tired of the biking and the long painful journey, there wasn't any doubt in our mind about to catch a nextday morning sunrise from the Sahyadris. everyone started getting up and refreshing theirselves with the ice-chill water from the reservoirs available on the top. Before the sun arises from the east, we reached a hilltop of Naneghat and set our cameras for the lifetime clicks. After capturing the best of the shots we got down and had a healthy breakfast of Khichadi, boiled eggs and then followed by the steaming hot tea. This made us ready and energised for the planned trek of Jivdhan with the another Bhataki Toli from Pune. We handed over our grocery to them and they also assured to feed us on the top of Jivdhan, once we get there after the puncture fixure session. But our luck was at the worst on that day...read on what happens...

As Santosh's Pulsar was the only bike which can handle the laod of triple seats on it we made our way to the Ghatghar village, from where we were about to start climbing for Jivdhan. Shrikant was busy in the photography and when he found his bike punctured (too!!!) whereas we already had left for the Ghatghar and he was only with Girish their. But thankfully the other group carried their luggauge and the message to us and Santosh went there to help them along with his bike. After few tries to remove the tyre he also gave up with an injured finger...!!!


However they managed to reach village and our mechanic skills flourished over there. Everyone tried out their experties with the limited toolset available and to fix the punctured wheel with the bicycle pump, that too with the damaged air hose. After few tries of fixing the problem we gave up and decided to ride both bikes with single rider and the Pulsar with the triple seat loaded with all of the luggage till Aptale, the village on the road towards Junnar, which was around 15km from there. Hence our Jivdhan trek got cancelled disappointing the other group, who were waiting for us on Jivdhan for the lunch. So we kept scribbled a paper with a message of love, giving them our contact details and left it in their 4W vehicle.


The riding for all of was very hectic with we, triple seat and Sourav and Shrikant with their punctured bikes. Finally at Aptale we found a descent tyre shop "Ashirvaad Tyres"with the board flashing a frank and clear message "आज रोख, उद्या उधार, परवा फुकट...". Fortunately no major damage observed to the tube and we set all our bikes with fully loaded again. On our return journey we tried to reach Pune as early as possible kreeping in mind that we are going to conquer Jivdhan some day or other, next time.


In all this trek was the learning experience for all of us and will be memorised forever.