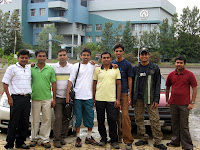 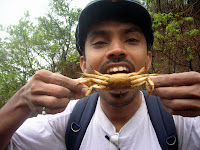 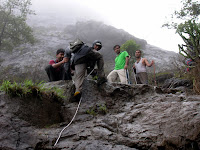 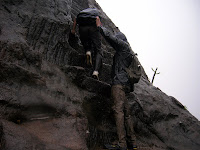 I we are checking out varous options for the next trek, Santosh kept insisting upon the Kalavantin Durg and pushed for it throughout the week. When the invitation to all Reflexions was sent our previous trek's star companion (Mr. AL) warned us about the risky weather conditions and the auspicious words were "***** घुसणारा आहे, जाऊ नका". But our "माज" didn't allowed us to step back and we were determined for the trek. The images in the mail were enough to draw attention of the major audience. Everyone was curious to know about the trek but didn't want to participate upfront. 5 fixed memebrs (me, Santosh, Shrikant as defaults and Huzefa, Girish joining in) were finalised apart from Umesh (was determined to participate when I commented on his "सिगरेट के फेफडे") who managed to find 3 more contributors (Rajesh, Abhijit, Abhishek) for his car's fuel. :)


The trek day's morning was not a similar as the earlier one. The rain already has began to shower and making us aware of the weather conditions for throughout the day. The picking up every members itself made a time of 8:15am to reach on the edge of the Pune city near Wakad. A group photo session followed by a Good Morning tea made us to all set for the prowl. The next stop decided was for the breakfast at मनशक्ति केन्द्र Loanavala, as it was suugested by Shrikant for the tasty breakfast. Everyone enjoyed the drive in the whiplashing rain and the windshield wipers moving in the full speed. The tasty breakfast their inclusive of मिसल पाव, थालीपीठ and some South Indian snacks with the steaming hot tea when its raining outside was nothing differing from the heavenly सुख. Girish was telling us the importance of fasting on एकादशी, while he was drooling over a साबुदाना वडा. He had a fast that day, and we took वडा पाव parcels for us excluding him.


When we stopped besides the Rajmachi Point the fog made our photographic equipments almost useless. Even our two car owners were popping there eyes out to see the road in the fog. I was more worried about Umesh as he was a new driver and more important, in a new car.


Reaching the common base village of Prabalgad and Kalavantin Durg was a visual delight with the clouds touching the fort peaks and the rain had stopped. When we started the climb on hill it was pleasant atmosphere. At once we tried to climb an ascent of almost 75 degrees and half of us succeded while others preferred a long simple route. And it happened. It started raining. When it rains in Sahyadri ranges, specifically when you are on a western slopes of पश्चिम घाट it hits you as a whip lashes because of the mighty wind. At the माची where the route separates for kalavantin and Prabalgad forts, we had almost lost our way in the thick fog. Finally we saw a human man made shelter, which was turned out to be a देशी दारु भट्टी (country liquour preparation). Santosh and Co. were whisting in the full throttle prior to reaching there and that's why the people working there hide themselves in the bushes thinking of a possibilities of Police raids. But when they saw us as गड-वारकरी one of them came out and helped us and guided us to the exact path.


Even after confirming the route it was not a simple task to reach the fort top. The route was marked with the white arrows on the rock but even then the demarkation was very difficult to find out in the heavy rain and stiff ascents. Finally after a couple of rock patches we reached in the खिंड, where we decided to unwrpa our वडा पाव parcels. Umesh was distributing the वडा पाव in each hand coming in front of him, and later on he found himself in a "SITUATION CRITICAL". There was no वडा पाव left for him, When everyone has taken their share. Investigations further proved that Girish who was on एकादशी fast also सुमडी में picked up couple of वडा पाव. The guy who was teaching us fasting b4 sometime had given up the fast in this situation of extreme rain and cold. But these are the lessons to be taken from such treks and we have to even share everything available, so it just became a matter of joke within us. Santosh's comment was "परत जर तात्या म्हणाला की उपवास आहे तर त्याला इथे आणून वडापाव खायला लावीन".


The path further was the toughest job. The the rock cut steps which were seen on the Google images were completely invisible in actual because of the fog. Another group which was comng back from the peak warned us to be careful while coming down as the steps were very narrow and the gusty wind was not allowing anybody to climb freely. This was the time when once I felt that we should give up a plan to proceed to top. "Am I taking too much of risk?" But only once. Then everyone made thier minds and started the climb mumbling the God's name. The steps were too narrow, about 6 inches, that can barely hold one foot at a time and the slant was more than 70 degrees. When we reached to the top none can beat the taste of the stale/fresh fruits we ate there. It was highly impossible to take out expensive cameras in the heavy rain, but still we managed to click few snaps. Getting down was the risky job. The narrow steps and the 1000ft valley to eat you (or catch you if you are so friendly to it). Each one was trying and I was yelling at each other to sit down while getting down, so that it will keep the Centre o Gravity close to the ground and reduce the risk to loose the balance due to the heavy rainfall, wind and the view of the depth of the valley.


Finally we covered the risky patch helping each other to get down safely and later on the had a good time with the crab caught by me with the bare hands. Everyone was amazed to see how can hold a crab in hands. On the way to the base we came across a family of 3 kids (of the age from 3yrs to 10yrs) and two couples climbing the fort. Hats off to that trekker family and their enthusiasm. When we reached the base we were completely drenched in the rain. Nothing is comparable to the feeling when you change into the warm clothes after such drenched trek.


Everyone was hungry at 6:00pm after a trek and finally we foound a sub-standard restaurant which can serve us a chicken and rotis/parathas.


The way back to Pune via Khandala ghat was not the easy one with the new driver Umesh and I was continuously telling Huzefa to allow him to drive in front of us, so that Umesh's car was constantly visible to us. Returning to Pune was a big sigh of relief for the car owners/drivers and a memorable experience for everyone who participated. The obvious question in our mind was as always: "बोला, पुढची भटकंती कुठे?"
This thriller is available at the photo link:
http://picasaweb.google.co.in/Bhataki.Toli/KalavantinDurg_June08