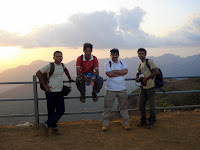 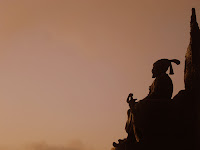 
The morning beauties include the Sun rise from the back of Jagadeeshwar Temple, Scenic misty vally, Sun rays filtered from the cloudy skies and the Mahadwar of Raigad. The Mahadwar is actually located at the height much lower than the actual fort, so we had to walk to that place halfway down the height. After being there me and AL thought instead of climbing the hill to catch cable down why don't we walk down to the base. Santosh and Shrikant wanted to enjoy the ropeway ride downwards so they went back to top and we started to descend down from there. Within 40mins we reached at the base and to our surprise we saw at the bushes beside the road the "Kali Maina" (sorry no English substitution for this). The unlimited Kali Maina was a treat for us before travel back to Mahad in a 13 (sorry..sorry... 6) seater.
The way back to Pune from Mahad was another driver's skill display journey. The most of the times he managed to bump us from our seats at least a foot in the air, and that too just after we start closing our eyes because of the tired trek. At around 5:00pm we reached Pune and Good Bye'ed each other with a plans and suggestions for the next Bhatkanti to return to the world of AC and PC with the new energy and Raanwaara filled in our lungs.
The visual Raigad tour is available at:
http://picasaweb.google.co.in/Bhataki.Toli/Raigad_May08