Tryst with Raigad in company of twinkling stars and RD, Gulzar.

By Unknown
/ in Bhatkanti Unlimited Raigad Trek
2 comments
After the successful pilot star trails shoot from the terrace my hands were itching for the finale. And I couldn't fing more approprate place for such shoot than the "Gibralter of the East" fort Raigad. Unexpectedly the shutter release cable shipped very early and I zeroed down the for the Raigad. Few last minute changes in the particiapnt members made us three me, Puru and Abodh. Eventually we cancelled the bikes' plan and decided for a car.

Set out on Saturday noon and picking up Abodh from the city we headed to Raigad via Tamhini Ghat. Ususal topic of chitchat was ofcourse a recent photographic activities and shoots. Even we shared our experiences of the equipment purchases from each other. A small lunch cum evening snacks break at Mulashi refreshed ourselves for the tour next ahead. Puru, who was going to see his dream of Raigad visit coming true, didn't want to miss the sunset from Raigad, and hence was literally flying the car from the roads of Tamhini Ghat and we were stuggling to keep our a**es rested on the seats. At around 5:30 we reached Pachad, base village of Raigad. Took a ropeway to the top. The roepway ride takes you on top of the fort within 5-10 mins and you get to enjoy a breathtaking view of the valley from the hawk-eye point. Also it save your time for climbing the fort (approx 3hrs, at the cost of some amount). Being a regular pilgrimmer (6th time) to the the HQ of "Swarajya" I was playing a role of non-official guide for these my fellow friends. Rushing them through the Queens' Placaes, AshtaPradhan Mandal offices, and the Royal palace of Chhatrapati Shivaji Maharaj we entered in the RajDarbar, the place of Pride for every Maharashtrian person and in turn every Indian, where Raja Shivaji was coronated and announced as "Chhatrapati" (an accepted Kshatriya King). Everyone's heart fills with pride and respect for this great King by knowing the fact that even the western kingdoms sent their representatives to attend the function in 1676 AD. We got few good shots of the west bound sun and the throne there. Reaching "Holicha Maal" made us to run for the sillhoutte of famous statue of Shivaji and then the nostalgic sunset. The sunset from here has alwyas made feel in the heaven. Many a times I have forgot the to shoot sunset while sun was setting down during my previous trips. This time I didn't allow this beauty to hipnotize me and captured few shots. While we were shooting the sunset a guard came to us and gave us a electric shock worth 440kV by telling us that tripods are not allowed in the fort premises. I skipped few heartbeats at the very momnt. I felt my dreams were sinking down and wished if a earth could break and take me inside. Recovering from the shock we were determined for the star trails shoot at any cost. Now the frame in mind with the fort architecture in the foreground for star trails wasn't possible and I was searching for a good frame, but couldn't found any. Guess I needed a tea-break and had it in the canteen called Deshmukh Hotel on besides GangaSagar Lake of Raigad. After this kick (!) of tea, brains started working.


We went gain to Holicha Maal and passed the BajarPeth (Market Place). There we started shooting for a BULB mode trick photography. I guess security guards noticed us there in the darkness and came to us and asked us to deposit our tripods (stands in their terminology) in the office. We requested them and, but after 15mins of requested they yielded and allowed us to use tripod for another one hour. But that wasn't suffcient exposure time I wanted and started giving hints to guards that we are ready to do "adjustments" if they "cooperate". Even we could read their minds that they were wishing for the same but couldn't talk directly and went after warnings of not to use tripods. We had already scared them with photographs of BULB mode and cloned personalities in the single frame on our camera LCD displays :-D

After some time of tricks we finished our sub-standard dinner at same Deshmukh Hotel at 10:00pm and sneaked into the pitch darkness of the Takmak Tok, away from the main road, where nobody can spot us. We made sure that nobody notices us with our white or similar colored shirts/jackets. We hide all such items and even camera LED lights with my shirt. Used minimum light to set the camera on tripod. Even the camera settings were done under the jackets, so that even stray light of camera displays doesn't become a cause of getting caught. Once everything is set and shutter release cable locked we had no other business but to chit-chat and listen some quality music, while Puru chosed to take a nap in under the twinkling stars. Me and Abodh were sharing our experiences and ideas at the same time watching the stars. We spotted at least 25 shooting stars and even all my wishes finished one after another (remember Hindi movie "Kuchh Kuchh Hota Hai"). After some time I had a wild thought tha if stars continue to shoot at this rate what will remain for my next star trails' shoot :-P . At the same time we were listening music from the MP3 player. The volume of ear phones was kept at half the intensity and we still could hear the music without putting those into the ears. Gulzar, RD Burman, Asha Bhosale and Lata Didi made our that night memorable under the sky. Imagine complete silence, no one around you, refreshing cool breeze from the Sahyadri, cell phones switched off, twinkling stars, and old melodies playing around.... aahahahaha.... what else you can demand from life. After two and half hour my battery drained out and we had to make a packup of the shoot at 2:00am. The foreground shot had to be taken with the other camera. We returned to the Nagarkhana, where all security guards are supposed to be monitor on the tripod usage during the day time. And at that time we were using the tripods at our ease for long exposure shots of the architecture. Even we tried some light painting shots till 3:30am. Then we felt that nights are for rest also. And eased ourselves in Nagarkhana itself. But it was very short nap as we were to wake up for the sunrise. From 5:30am I started waking others up. 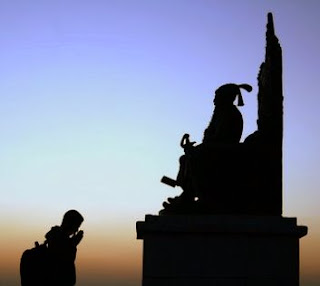 Sunrise was as always beautiful. After sunrise we had morning tea. Visited Jagadishwar Mandir, Shiv Samadhi, Takmak Tok and started our journey back to Pune at 9:30am.

Around 1:30pm we reached Pune through the hairpin curves of Varandha Ghat. Refreshed ourselves at Joshi Vadewale bid a good bye till next Bhatkanti.