Wai, Menavali and Dhom on back to back days.

By Unknown
/ in Bhatkanti Unlimited dhom menavali wai
1 comment
When Soumitra aired an idea of Wai and Menavali for the group shoot of Photographers@Pune group, I was more than happy personality because I have heard of these places for good river ghats and old architecture but never got a chance to shoot. As it was planned as a entire group shoot there was lot of advance planning and pickup schedule involved. Finally whopping 35+ members turned up and we met after a Toll Plaza on NH-4 after Khed-Shivapur towards Satara. From there wheels zoomed towards Wai with kind of "non scenic" (because of the summer) towards Wai.

Wai is known for the old architecture temples and well built ghat along the Krishna river. This ghat is supposed to be built by Peshwas and provides a good opportunity for the rural day-to-day life shots and portraits with obvious temples. The very famous temple is "Dholya Ganpati" is major attraction for the devotees. Also a small village called Menavali is famous for the old Shiva temple and scenic view of lazy flow Krishna river with the ghats. 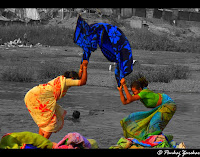 This ghat is built by Nana Phadanvis, a very senior official from the darbar of Peshwas. The Nana Phadanvis Wada (palace) is also one of the major attractions in the area. This place has also made a mark in the modern world of bollywood when famous films "Swades" and "Gangajal" were shot here. 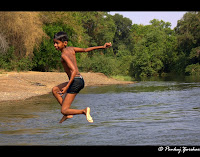 Few shots from these ghats of washing women and water diving kids made our shoot successful. From there whole team headed to Dhom dam backwaters. The light and the time to reach there was perfectly wrong to shoot. Hardly anything to shoot and I started to think in terms of the future shoots there. Keeping few frames in mind we returned to Pune. 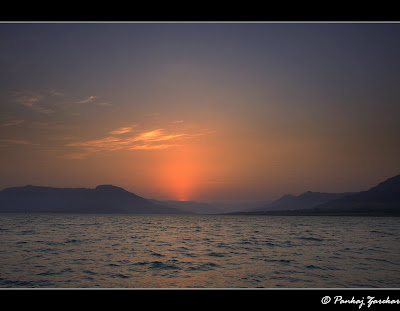 Next day when Deepak asked about the sunset shoot somewhere, my obvious choice was Dhom dam. Picking up Soumi we reached Wai, Manavali and Dhom. Though security guards didn't allow us to climb on a dam wall, we finally saw few people strolling on the dam, who climbed from the other side. We sneaked from there on the wall were able to reach near the water. My God...!!! the sunset seen from here was the most ideal sunset, which I used to paint during my school days with water, two mountains and setting sun exactly at the center of those.