Weekend Delights at Panshet and Diveagar

By Unknown
/ in Bhatkanti Unlimited Diveagar Panshet
4 comments
The monsoon already had showed us first signs when we were atop Sinhagad on May 30, 2009. Though since then Pune sky was filled with the scattered clouds it wasn't really coming. And everyone was desperate to get drenched in the first showers. Friday morning was as usual went praying for the rain to come and I put my GTalk status message "देवाला कुणीतरी सांगा ६/७ जूनला पाऊस पाडायचा असतो..." because we had planned Panshet visit on Friday night for the fire flies miracle followed by a two days trip to DiveAgar in Konkan. Despite of the comments from the friends "nahi yenar paus" somewhere at the back of the mind I was sure it will rain. And around 4pm in the evening नभ मेघांनी आक्रमिले... and within half an hour's time बरसले पण. That was first monsoon downpour in Pune and I was assured about the great monsoon. The way I screamed after seeing the showers from the window made everyone in the office to stare at me with the doubting faces.

I left office dreaming about the trip ahead I started for the OW's place and realized that first rain had revealed the Pune traffic trailers. Taking a long turns somehow reached there and we started for the Panshet. Deep and Soumi were doubtful about the fireflies because of the downpour, but I was assuring them about the same. When we reached Panshet the view there made us go mad behind the spectacle. 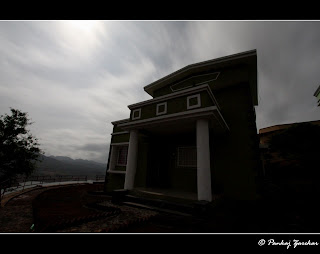 First we relished ourselves on dinner (chicken and bhakari) which Soumi had to eat like a medicines (as he doesn't like non-veg food). Then we relaxed ourselves in an open air for photoshoot and to witness the spectacle. Thousands of fireflies were around us on the different trees and were blinking in a such unison manner that we were almost feeling the light waves across the woods. After few futile attempts to capture them in camera I gave up the photo plans and just enjoyed the view from the terrace. We hardly couldn't sleep because of the combined effect of electricity failure, trailing mosquitoes, choked up smoke of कासव छाप and absolute no wind around, while to our wonders Deep-OW was having a sound sleep under the covers. Me and Soumi gave up prayers to निद्रादेवी and started chitchatting in the terrace at 2:30am. Finally somewhere around dawn we felt asleep for the sunrise next day.

Freshened up, and set for our next journey to DiveAgar. Near Khadakwasala dam we had our daily dose of kicking smoking fuming tea and no one was satisfied with a cup and wittily asked "अजून एक पेग भरा". This gave us much needed energy for the drive till Mulashi and halted at Green Gate resort for the breakfast. In this journey Standard Chartered Bank entertained us by sending total 23 messages for a single withdrawal on a previous day and raising my blood pressure by each SMS for the first few. though later on realized the snag in their SMS gateway and my balance intact :-). Also we teased Soumi for the co-traveling bus from Baner full of roudy people. After a journey of 5 hours we reached DiveAgar in humid climate and had a not-so-good lunch. It was not-so-good because fish quantity wasn't enough and सोलकढी was missing its much needed punch. After dumping the baggage in the rooms we decided to scout for the location hunt for the evening's photoshoot, which was much tiring in the afternoon's hot+humid climate of the shore. Returned back and got a refreshing nap in those small rooms.

The evening was the most memorable time in the trip. The place we hunted earlier was a on a Diveagar-Shrivardhan road, Bharadkhol village- a authentic fishing village with lot of activities and good sea shore. 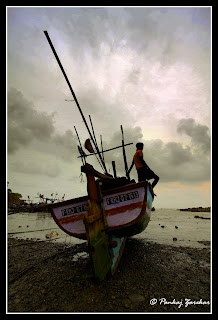 We were actaully disappointed with the overcast sky and dull light. It was a day marking monsoon arrival in Konkan and end of fishing season. Fishermen were busy in withdrawing the boats from the sea and covering parking them on at a higher places during the monsoon. We befriended with few of them and chatted with about their life, fishing equipments, season, monsoon. At the same time clicking pics. They were amazed to see their snaps on camera screens and we were amazed with simple and happy lives of these साधी माणसं. After few shots their, trying to lift their heavy fishing nets, touching the concrete weights of the nets and experiencing the real Konkan fishermen lives we went further on Shrivardhan Raod for the rocky beach. And the God listened our prayers and opened up the sky perfectly at the time of sunset. Out cloud master-Soumi didn't waste this opportunity to click his masterpieces. On return a nice meal from आवळस्कर खाणावळ ended the day for us after a moonlight beach walk. 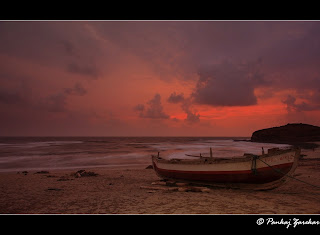 Graceful morning at Diveagar beach has been always a theme for my dream. Morning, as always brings fresh energy out of you and makes you more happier than the previous. Sky was clear blue with clouds and beach waves on the shimmering sand and portraits of children playing in water, plus few wide angle shots are the measures for the eventful morning. 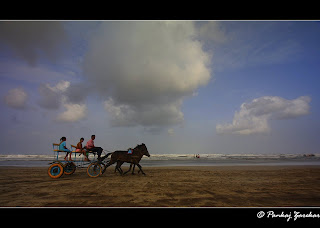 After breakfast and darshan of SuvarnGanesh we started our return journey towards Pune and reached well before time.