In search of heaven on the earth... Tung fort.

By Unknown
/ in Bhatkanti Unlimited Trek tung
9 comments
After tantalizing my senses for the new season of Bhatkanti unlimited with pilot trail at Purandar-Vajragad trek, it was said and understood that I was no way going to waste my weekend in the choking concrete jungles of Pune. Every now and then i was looking for a weekend company. Finally a veteran and (Virasati) trekker Dev joined and I was already thrilled with this dude's earlier stories. Also few of my friends joined at 11th hour. After an usual google told us that the launch service doesn't ply those in monsoon, ultimately we had to resort to our faithful and trustworthy bikes. And being the short climb we also had another fort in mind in the close vicinity of Tung.

The meeting point was decided as Chandani Chowk and here we already lost our vital time waiting for the newest members. We were running late by 2hrs than what me and Dev had planned. 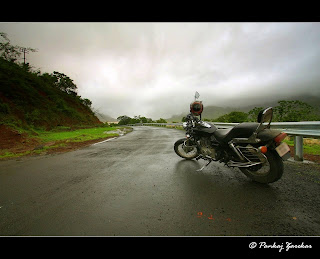 Also the new bikers seemed only highway bikers and couldn't keep pace with us in the not so good tracks in Mulashi. We lost much of the time in waiting for them during the drive than the actual driving. Delicious breakfast at Disha's Point brought everyone out from the morning's sleep. Also one more bike joined us, for whom we were waiting at Chandani Chowk. They were late because of the minor accident to their bike and few bruises on calf of the pillion rider. We had now started hoping that at least they'll keep riding with us and we won't have to wait much. But very soon our hopes went in a vain and the same story continued from the previous page. Only one bike out of 4 was with us and others again started creeping behind by 15-20mins. When we reached at the junction on Tamhini Road,just before Dongarwadi, from where we turn right toward Lonavla we were gifted by a misty climate with thick fog. 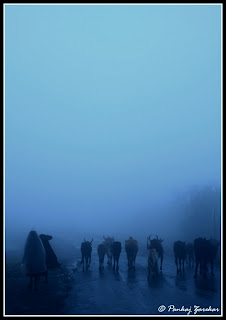 Few grazing cattle and villagers in the fog gave us few good frames. As we passed a dense 'Devraai' we could feel the gushing wind coming from the huge valley.

(By the way 'Devraai' Forest conserved in the name of some god, where cutting trees or bushes, cattle grazing, plucking flowers and fruits is banned by superstitious belief. It's a self contained eco system within. In short it's a way for eco-conservation of bygone age.)

When we stopped for a short stretching break at Pune's own Grand Canyon (Deepak Point) everyone was mesmerized by the view of the valley and the uproar of the numerous waterfalls rushing down the valley. Though this spot wasn't new for me and Dev, it gives a feel of crazy nature every time. While everyone was busy with their cameras Dev spared some time to do a quick survey for the approach trek to the bottom of the valley and thereby to the base of the largest waterfall for his future expeditions.

Though we didn't want, We left from there and headed toward Lonavla by an absolute dirt track motocross kind of road. But we were never complaining as the surrounding Sahyadri provided us all shades of green with the fresh air of few whiplashes of rain. Road really becomes interesting in such conditions, and if you are riding a bike it makes you ride on a wind. We could see a freshly collected water in the dam reservoirs of Mulashi and Pavana to our right. At one spot we saw a wide stream with few waterfalls and rocks in the bed crossing under a bridge. I hadn't tried my ND filter since I received it and smelled an opportunity there. Immediately, we jumped off the bike and started looking in the eyepieces of cameras. The trailing bikes followed us and we spent handsome 1hr there until minds contained with the slow shutter water blurs.

Once this was done, usual warnings to trail bikers given we left towards the Amby Valley road passing by the breathtaking view of Pavana backwater, Tikona fort beyond, few unidentified peaks and challenging stance of Navra-Navri-Bhatji. One more lap through the Devraai, which looked like typical Amazon like tropical rain forests, encircling the Amby Valley, bowing our heads in front of mother nature, cursing Sahara group for spoiling the Koraigad we reached at the base village of Koraigad- Peth Shahapur. This route gave us ample spotting of birds including water hens, flock of quails, bulbuls, robins, green bee eaters and peacock calls. One more round of waiting for the trailer bikes, we witnessed the majestically rare behavior of nature. On the mountain ranges opposite to Koraigad we saw four waterfalls in a row reversed upwards from the edge because of the mighty wind. Road after Peth Shahapur was Ghusalkhamb (Cloud 9 hill resort) and then Tungwadi. Within half an hour we reached at the base of fort.

After inquiring to few local people and couple of misinterpretations of gathered information finally we started negotiating with the Tung fort's ascent. The fort was comparatively small and enjoying the cool springs' water, the view of paddy fields and snaky roads we reached at the main entrance of the fort. The fortification was quite intact and as we turned to our left after the main entrance we saw that there was still lot to go to reach Balekilla. Also others climbed till Level2. Kudos to Mayuri who managed to climb with her injuries and Mahen, Roopali, Kopal and company for making it possible.

We both (Dev and me) traversed around the final peak in search of the way up and with few extra efforts reached at the highest point of the fort. I have had such moment 40 times so far, but each time it gives me a another height of pleasure and joy. What a lovely feeling when you see nothing other than a open sky with clouds of all shades of black, grey, white and a saffron flag of almighty above you...!!! 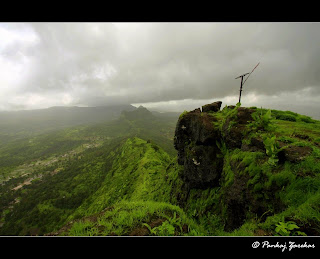 While we were shooting the surrounding at different angles and sides I shouted, "Dev, look..." and his response was "whoaaa...". We were witnessing the most beautiful thing, that a mankind can ever see, a complete semicircular rainbow below us across the whole valley with the Pavana dam backwater and Tikona fort in the background. What else can you expect from life. What else could be a better gesture by 'माझा सह्याद्री' to a trekker like us? 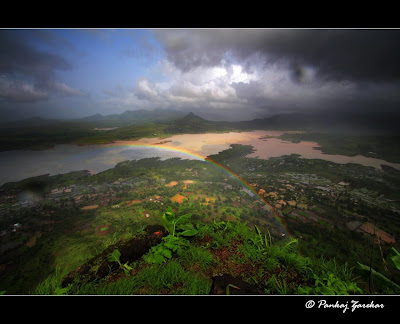 Gosh...!!! I am still experiencing that hair rising experience.

We were out in search of heaven on the earth. Did we find? You tell...