Khandala and Mulashi - In search of rainfall...

By Unknown
/ in Bhatkanti Unlimited khandala Monsoon rain
4 comments
Photographers@Pune shoot was scheduled on Sunday, July 5th and we joined in as soon as our work schedules allowed us. A day before, over a coffee table at Deccan Goodluck, transport mode was decided as Swati's car and next day we (me, Suhas, Soumitra) set out for the search of rain towards Khandala via a old Pune-Mumbai highway. 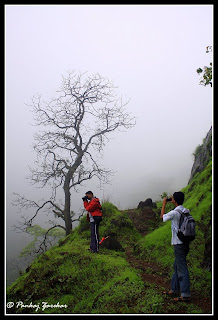 While Swati was speeding her machine towards Lonavala we were enjoying the shades of greens outside. The obvious topic of discussions was photography, P@P group, members, and forthcoming events. Also Suhas was showing his satisfaction over the results of his point and shoot camera. Past Talegaon Suhas spotted a beautiful light leaking down from the clouds towards the east above the mountain range. We clicked few shots there and started towards Lonavala. While we called the other members of P@P they were at Lonavala and we were trying catchup them. But we felt the strong need to have breakfast and decided to take a break. As usual my choice was Manashakti Kendra at Lonavala for the thaleepeeth and others opted for Pohe. While I was relishing myself on my breakfast Soumi and Swati were no behind cursing the all inclusive (poha, cereals, mataki) poha.

I was sure about the plain tea at that place while Soumitra was remembering his last experience with the herbal tea and Suhas and Swati (despite of her non-tea-drinking habits) joined him for the same option.As soon as Suhas tasted the herbal tea, his expressions were worth watching. In his words, "प्रत्येक sipला नवीन taste मिळतेय." Out of curiosity I tasted from his cup and went on laughing and rolling on the floor. I just couldn't stop laughing at the taste. It was combination of something cornflour mixed with water, some salt added, no sugar with the hint of strawberry color. Actually no could tell the exact taste of the chemical. Looking at my laughter we named that tea as 'LAUGHTER TEA'.

From there we headed to Khandala station, where we had to catch a train to reach Monkey Hill station. But we didn't get tickets of Deccan Queen or Pragati Express at Khandala and we started looking for other options. One of the dwellers in at the station advised us to trek down from the Rajmachi Point and we would get a descent safe parking place. This trek was mesmerizing. Walk down the hill in the mist and clouds surrounding us, cool breeze swirls around us and wet grass making our feet wet, what an amazing experience. When we reached Monkey Hill the view was disappointing except the Rajmachi valley on the right side. It was cluttered with the rail tracks, pathetic overhead wires, plastic garbage around. But station master of the station offered us the inside view of his cabin and the basic but effective rail traffic systems of collision avoidance. After calling the other shoot members we came to know that they are waiting for the uphill train to Monkey hill as their Sinhagad Express didn't stopped at Monkey Hill. But unfortunately only couples of members came towards Monkey Hill and others opted to walk down in the other direction. After waiting till 10:30am we decided to leave that place and return to Pune via Amby Valley and Mulashi.

We drove towards the Amby Valley. It was drive in the clouds. We could hardly see beyond 10fts. But despite of clouds and mist there was no rain, though atmosphere was of rainy season. Asking people for the roads we drove towards the Bhambarde village through the narrow pass and tropical thick rain forests of western ghats. The road was like a dirt track and hardly one car can pass at a time. Swati was showing her driving skills. But passing by people were not sure about those. Rather one advised us to take driving seat by someone other than her. But we showed confidence in her ability and let her drive in all types of conditions. Nevertheless to mention that She stood upto the mark :-) alongwith the soothing our eyes with the view of green Sahyadri and small water streams along the route. 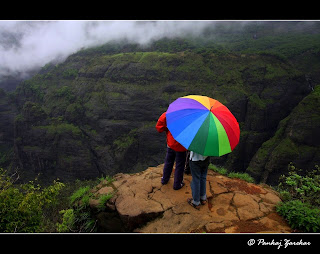 As we were approaching Pune rain cluds were rapidly vanishing and we were voicing sighs over that conditions. It was very disappointing to see a blue sky in July. Around 2pm we reached a P@P famous Deepak Point (because Deepak showed us this place) and enjoyed the view of Konkan region from the cliff. After final shots of the colorful umbrella and the surroundings we left that place and reached Pune by 3:30pm.

After this trip we all are praying for the better rain fall in the region for next few weeks.