By Unknown
/ in Bhatkanti Unlimited Purandar Saswad
6 comments
This weekend was not proposed to be so exciting as had working Saturday coz of the release (IT heck). Also team had adjusted the work schedule such that every person will get a day's off (2 of them had their anniversaries, and we had prank calls on their cellphones at midnight 12). Sunday morning was preset for PuLa Deshpande mini shoot and followed by team P@P meet at Goodluck, Deccan. Hence Saturday went ruling out any possibilities of trek or long bike ride.

When i woke up on Sunday morning 6am and made an attempt to tap my darling, she refused to cooperate with the rear flat tyre turning down my shoot plans, as no tyrewala will open his repair shop at 6am. Finally i gave up the shoot plans and resorted to Pune's own bus (efficient?)service PMP for the meeting. As usual meet was delicious with bun-omlette at Goodluck. Also meeting who's who in the group was delighting.

After the meet everyone bid a goodbye and i started thinking of the rest of day's plan while traveling back to home in bus. Figured out the partner (or bakra)and called him for confirmation. Rahul-my neighborhood junior readily agreed and after fixing the bike tyre we set out for Purandar at 12noon. Taking the Diveghat turns and leaving Saswad behind we found our way to Purandar through the so called road with creamy ankle deep mud. Finally road got better and we reached at the base of Purandar. Parked our bikes safely. Monsoon had started showing the glimpses. In soft drizzles and slippery muddy path we made our trek till the abandoned church atop. Along the way noticed many of the हौसे-नवसे-गवसे trekkers were pitty'ed for their mindsets of listening Bollywood songs (that too Himesh and company) while trekking. Fortunately we never needed such भंकस when we are amongst chirping birds, whistling woods and clouds are unleashing new frame in the valley every now and then. The motorable kuccha road till the churches makes this fort a crowded place with plastic waste (yet another Sinhagad).

Murarbaji- a brave warrior of Chhatrapati Shivaji laid his life for the Swarajya on Purandar. After his death Chhatrapati Shivaji signed a Purandar pact (पुरंदरचा तह) on June 11, 1665 and returned 23 forts captured from the Mughal emperor. Also son of Shivaji, Sambhaji was borne on this fort. After the cruel murder of Sambhaji at Tulapur Aurangzeb captured this fort and renamed it as Azamgadh. Next this fort was ruled by Peshawas and Sawai Madhavrao Peshawe was borne here. 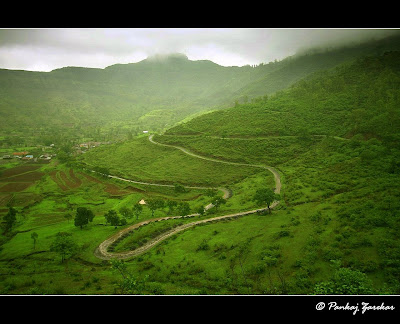 Few shots at Murarbaji memorial statue and within 1.5hrs we reached at balekilla entrance called Bani Darwaja. Visited a darshan of Purandareshwar, Rameshwar, Kedareshwar telples and few remnants of the fortification. We found hard time for photos because of heavy whiplash rains and foggy climate along with many stray people in the frames. Once we finished our Gadferi of Purandar, we saw the scope for Vajragad at 3pm. We had to run fast so that we could finish it before the sunset. Most of the part of road to Vajrgad was full of old abandoned army quarters and offices. Searching a way through these haunted like structures we started the climb through a thick vegetation and steep tiring ascent. Vajragad is comparatively serene and lonely fort as there is no motorable road to reach there. From church one can reach Vajragad within an hour. There is not much fortification on the fort except few bastions and a door, as this fort was built as a utility fort as a place for cannons for the attack on Purandar. After seeing a temple and few minutes of roaming around we started our descend down. On the way down we met 2 men from Bhosari (suburb of Pune). Overall look was similar to us and looked serious Durg-Premi at a first glance. Both of them had their surnames Phuge and told us that they have been writing untiring letters to officials for transferring the property of Vajragad to government from army so that restoration work can be started. They also told us British people constructed these quarters here and all offices including courts were atop this fort, prior to era when Saswad town developed. After having a steaming hot tea in small tapari near church, at 5:30 we were at the base of the fort, fully drenched in rain, little exhausted in chilling cold weather.
But yes, we started return journey as our hearts filled with the joy of conquering two forts in a day (total count is now 39), lungs filled with fresh रानवारा and adding one more celebrated day of life unfolding the unperceived excitements. Makes me smile? Oh yes, definitely!!! Wish me many more of these.